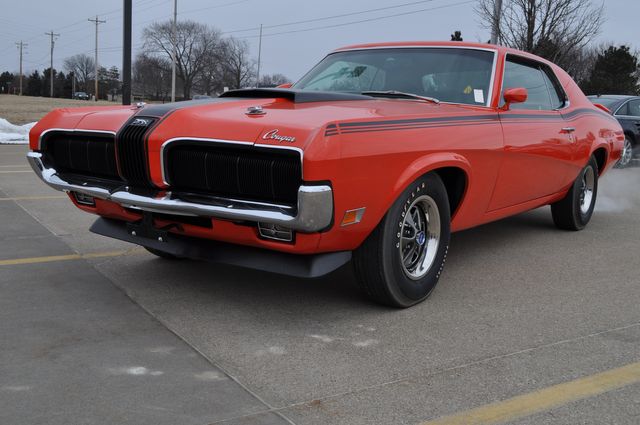 *This calculator is for informational use only and is based on the information you provide. Actual loan amounts and payments will vary based on additional items such as taxes and fees as well as the actual interest rate available to you from a financial institution.

Ford didn’t hold back on the power when it came to equipping their 1970 Mercury Cougar with the 428 Super Cobra Jet engine and the 4:30 Drag Pack!

Brewed for racing, this well built V8 produces around 335 horsepower, easily launching you down the quarter mile!  Designed using the 428 cubic inch, big-block FE-series engine with the 4.30 Drag Pack, and this power plant has a stronger block, a more aggressive hydraulic lifter, a Ram Air induction and an 4 Spd Manual transmission, all resulting in a car that develops all its torque at low-rpms and is reliable enough to be driven daily.

Well taken care of, this Q Code 428 Super Cobra Jet is truly unique. It is a One of One car truly as rare as they get. Of the 72,365 Cougars built in 1970, only 215 came with the 428 Super Cobra Jet, with only 70 having the Manual Transmission, 21 of those were painted Competition Orange and only 6 had black Decor Seats and only 1 of those were produced with Rear Speakers, making this one of the rarest Cougars out there.  Meticulously maintained and taken care of, this rare car looks like it just rolled off the showroom floor! After spending a good part of its life in a private collection, this muscle car is ready to stretch its legs and have some fun on the interstate!

As soon as we listed this car online we were contacted by KTL Restorations in Daville, VA on Facebook to let us know that they did all the restoration on the car and finished it in 2009. They listed all the history and pictures on their facebook page and where nice enough to let me use some of their pictures and history info Thank You KTL.

According to KTL Restorations the car was restored by KTL during the Tom / Kurt era of the business, in 2007 / 2008, As Tom remembered, the Eliminator was from Long Island and had been their for years, then they believe it was bought from Barrett Jackson. It was placed in a private collection. The details of the cars beginnings are not 100%. After being stored for some time, it was sent to KTL in 2007 to receive a full rotisserie restoration and was completed in 2009. It came to KTL with an A block and a Boss 302 tranny. KTL tracked down a date-code-correct block and rebuilt the engine, along with the correct transmission. The oil cooler, air cleaner and rear end were original to the car. During this time of restoration, many were painting the undercarriage red oxide vs the factory Dearborn (slop) gray and this one was no exception. When the vehicle was complete, Tom Lawrance took it to the Yellow Rose Classic Car Show in August of 2009. It won "Classic Winner" and "Best Cougar"

We have the Dealer Window Sticker, and Elite Marti Report. For more information, call Jason Bratcher at 563-344-8697 OR 563-570-6670, and grab this awesome 1970 Mercury Cougar 428 Super Cobra Jet before it disappears again!  Ron’s Toy Box is your home for the best toys! Thank you for considering Ron’s Toy Box for your next vehicle purchase .